Very often, the focus of my blog posts is some mishap or other: some series of events that only seem to happen to me, something I have done wrong, some mini disaster, a bit of stress of just one or several of those moments.

Last Saturday was not one of those. I actually had a perfect day. Should I even write about it? I am not sure if I have a misfortune to make you laugh…

I had purchased a voucher for a Stand Up Paddle boarding lesson, as it was on my Perth bucket list. I had seen people doing it on the Swan River and thought it looked like something I would like to do.
There were two other Au Pair friends also doing it, so I wasn’t going to be on my own. I also had a lift lined up from someone who lives in the same suburb as me, so didn’t have to do battle with Perth public transport ( if you read OFF UP THE COAST you’ll know my feelings on this).

It had been raining most of the week, but I woke up to a beautiful sunny morning, with a clear mind (no booze the night before) and a healthy (ish) body – ready for action. My concern was that I read wetsuits were NOT provided, and as it IS winter, I didn’t fancy falling in. Then I must remind myself that this is Perth, not Melbourne, so it’s really not THAT cold. And yes, if you haven’t thought/said it already – I do indeed come from colder climes, so yes, I should be used to the cold weather/water etc. My other concern was my left knee: still bruised from my little ice skating escapade (read LIVE A LITTLE for that disaster) and comes with a certain amount of fear of hitting or even using it. I had read up on Paddle boarding, and the first thing you do is kneel and learn to get your balance – not something I can comfortably do – and can you believe this – because of this I was considering surrendering my voucher and not even going!

Luckily I gave myself a good talking to that morning and got up and on with it. Wished I had bought a pair on board shorts – who in Australia doesn’t own a pair of boardies? Me of course!
It turned out that our lesson was just the three of us – 3 Au Pairs on paddle boards with an mean age of 28 (this is indeed unusual in my line of work!) went out on the Swan with out instructor Cristina from Germany. The water wasn’t cold, just a little “eech ouch” getting in on account of all the tiny shells on the shore.
I was given the biggest board – probably on thanks to my usual look of uncertainty. After a brief “this is how you do it” We lugged them into the water and got on. It hurt to be on my knees – bloody ice skating – so once we got some speed (literally moving, not racing) we got to our feet.

The sun was warming my back, my board was steady and I was smiling because I was paddling! I managed to turn without falling off, I coped with a wave caused by a passing boat, and didn’t fall off when I looked round at the large splash to my right when H had fallen off her board trying to get a photo of M!

The only problem I had was a cramp in my right foot (It wouldn’t have been right for it to have been THAT perfect), which I later learned was perfectly normal, although incredibly uncomfortable, as the body tries to counterbalance what the board does. Once our level of comfort was ascertained, we paddled back to shore to get different boards. This time I had a shorter, lighter, therefore faster board, which was much more fun to work with. I actually ENJOYED this outing, and found myself asking fellow British nanny friend from Torquay if this was something people did at home. Yes, apparently it’s quite popular! Show’s what I know, as the first time I had seen it was 6 months ago here in Perth.

To congratulate ourselves on a morning of exercise that doesn’t feel like exercise – I want to do more of this – we went to the Matilda Bay Tea Rooms. An Idyllic setting on the river, under the trees where the parrots sit and… poo on your slice of chocolate cake. No joke. But it wouldn’t have been MY blog post without a little bit of trouble… 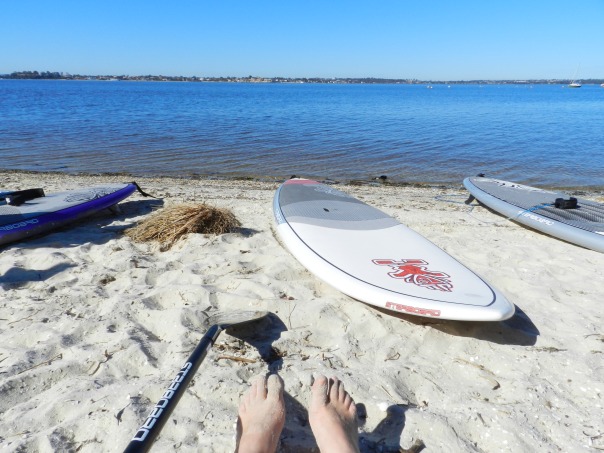