I really did have so much to say about Bali, but racing back to my room each day to write about it wasn’t really top of my priorities! Now back in the UK, suffering from a mix of emotions with a bit of insomnia thrown in, I guess it’s time to catch up!

After a few days in Ubud I was keen to get to the coast and experience another aspect of Bali, so having done a bit of reading and chatting to other travellers I decided to head to Amed and work my way down the East coast to finish in Sanur.

The journey to Amed took much longer than it should have thanks to a ceremony. This didn’t seem to bother anyone at all, and I found this quite surprising as traffic was backed up for kilometres in both directions as a procession was slowly making its way along the road. Sitting in a bus with no air conditioning when the temperature is 30 something and the humidity is high wasn’t ideal. Most people got out of their cars, and I asked our driver how long we’d have to wait. “No idea” was his response. I asked what the ceremony was for ” No idea” was the response again. I understand that it’s perfectly acceptable in Bali for ceremonies to stop everything, and that such ceremonies can occur at any given time, often without much planning or warning…

On our arrival in Amed, as I ranted about earlier, we were dropped off outside a hotel and told we weren’t to be taken any further. You can imagine my horror as I looked at the uneven roads, hoisted my backpack onto my shoulders and wondered how far my suitcase would allow me to walk. To our rescue came Kadek ( very conveniently of course) who drove the French passengers to their hostel and me to his cousin’s homestay. It wasn’t where I had planned to stay, and once I looked around I realised it wasn’t where I wanted to be either, as I had to walk 45 minutes to go snorkelling. However, such is life, and at the mercy of two years of luggage from Australia, I had little choice.

Once I had freshened up and had a ridiculously cheap lunch of omelette and tea cooked at the homestay, I had a look around. I had been invited, and I later realised, possibly caused great offence by saying no, to a ceremony that was taking place on the beach that afternoon.
Kadek told me all of his family would be there and I would be most welcome to join, I could take photos and experience something of true Bali. Yes I was intrigued, but desperate after a week in Bali to immerse my aching body in the sea. I enquired as to what happened in this particular ceremony and was told that thousands of people would go to the beach at 4:30 pm, dressed in white. And what do they do there, was my question. Everyone brings animals which are sacrificed on the beach, to the gods. What?? Yes, goats, sheep and I thought he said dogs, but perhaps he said ducks. Never-the-less – keen though I am to get involved and experience something magical, I just didn’t feel I could support, let alone watch something like that. I hold no religious standpoint in this area, but my “religion”, or at least my way of life, does not agree with things like that. Sorry!

So I walked along the beach, past the angry dogs, and children asking me to take their photo and then asking for money for it, past the nice looking guesthouses on the beach, all the way to Jemeluk to snorkel.
Oh the relief to get into the water, and oh the wonderful things I saw. Ouch, I bashed my knee on the coral and saw blood spilling out as I understood the sign I had read about snorkelling only in high tide. Oops. So I got out, and went further round the bay, refusing a few massages, drinks and beds to reimmerse myself in the refreshing water to watch the underwater spectacular and pass away an afternoon finally doing exactly as I pleased.

Outdoor shower in my homestay 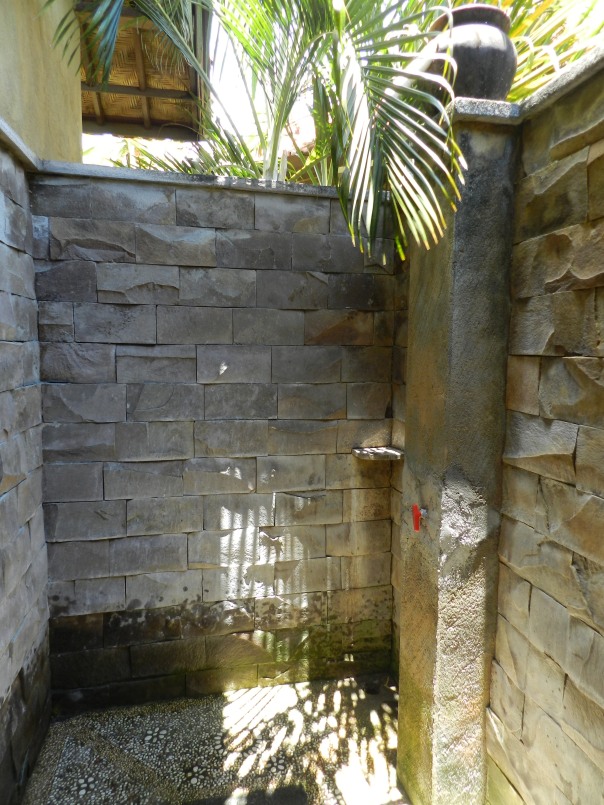 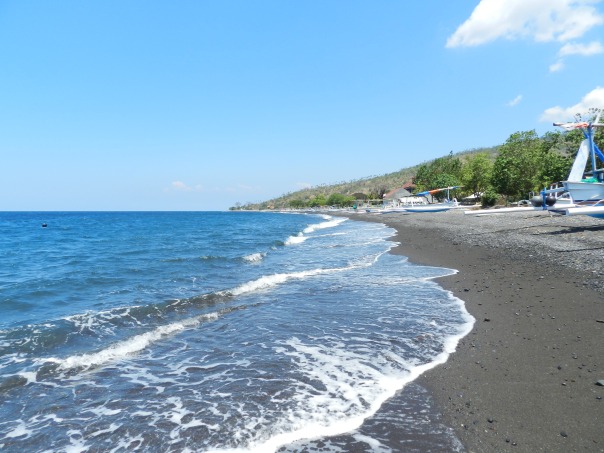 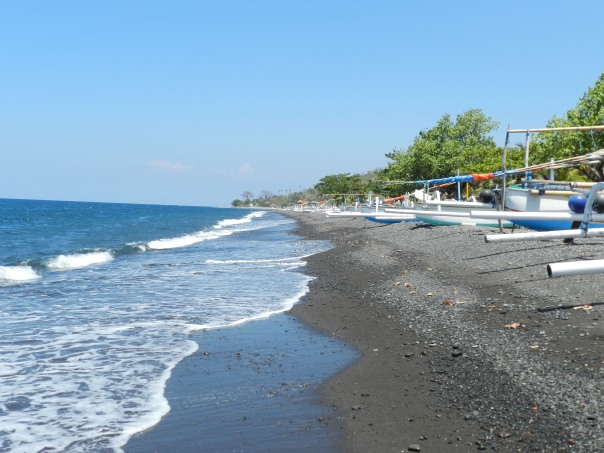 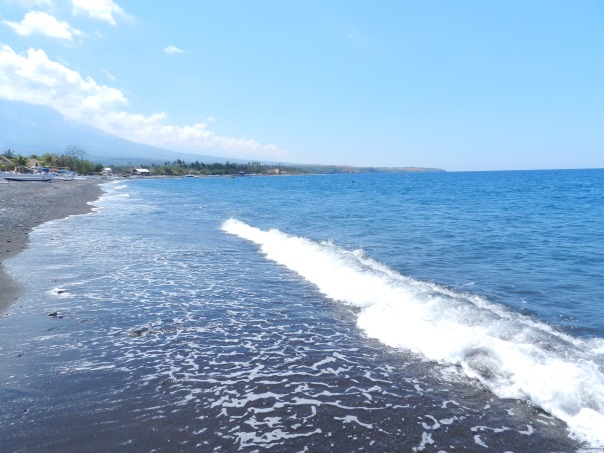 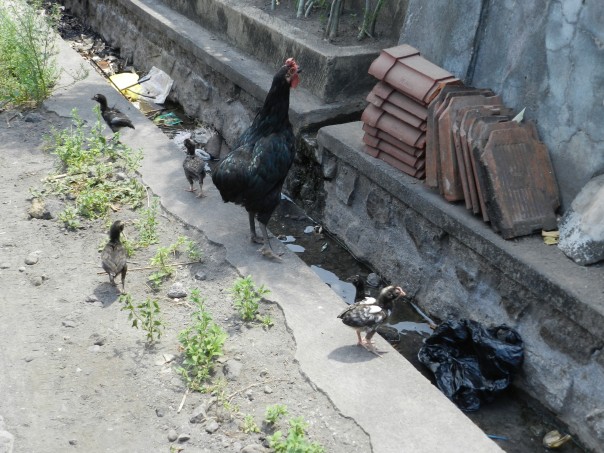 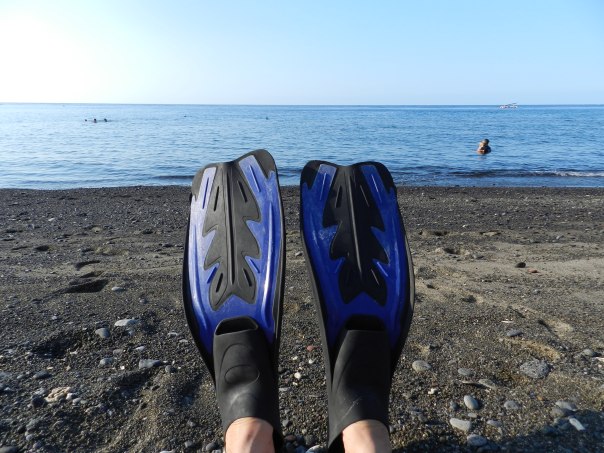 Not as bad as it looked 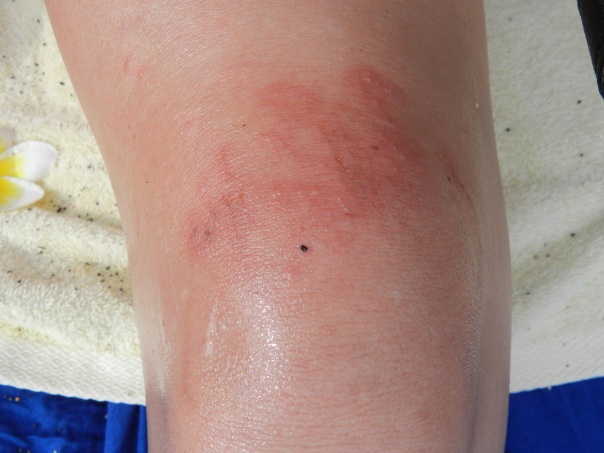